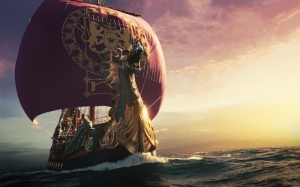 Reepicheep was even more enjoyable and gallant than the first time. King Caspian seems to have taken on the accent of his Narnian subjects (but my, he looks nice with that beard). And yes, Eustace is as deliciously odious as he can possibly be.

The third Narnia movie based on the books of C.S. Lewis — Voyage of the Dawn Treader — came out just in time for the Christmas season. And while it’s not as strong as its predecessor (Prince Caspian), it’s a fun film, and a nice addition to the series. As was the case with the books, it has a lighter tone than the second instalment, partly because of its episodic, adventurous nature. And I suspect that the only people who will take exception to it will be the same purists who objected to Susan’s very light flirtation with Caspian in the previous film. Or those who want to see all the Narnia movies primarily as Christian conversion tools.

The plot deviates very slightly here and there from the story in the book. (But of course, what movie adaptation doesn’t occasionally vary a plot that works fine in print but which would not work in live action?) An element is added — the search for seven swords — that helps to tie the otherwise unrelated episodes more organically to each other, but in my opinion it doesn’t detract from anything.

Some things are given less time (for example, we don’t really see [pardon the pun] the Dufflepuds after their dilemma is resolved). And other things are extended – such as Eustace’s episode (I’m being careful not to include too many spoilers here). But the fact that it lasts longer than it does in the book gives Reepicheep a real chance to shine and to reveal his noble nature. It also allows Eustace a chance to grow as a person, learning to be both courageous and giving. So I think this enhances the movie, and provides a very redemptive message.

One difference between the Narnia and the Harry Potter films is that Narnia is almost filmed in real time. As the kids grow older in the story, the actors grow older in the movies. And when they’re getting too old to play young children any more, why, those characters vanish from the story for the same reasons. We did get to see Peter once, and Susan about three times in this movie, but it was Lucy, Edmund, and Caspian who stood at the forefront this time.

Edmund has always been my favourite character, and I’ve loved seeing him grow up and become a responsible person over the three films. I felt he really shone in the Caspian movie, and he just keeps growing in this one. And Lucy, too, steps into the limelight in Dawn Treader, ironically as she struggles to think of herself as someone other than “Susan’s younger sister.” I felt that both of these characters reached an appropriate culmination in their swan song in the Narnia movies. And they have me really hoping that someone keeps going and makes The Horse and His Boy into a movie as well, because by then, all four actors who played the Pevensie children will be old enough to play themselves as adult kings and queens.

The one character who I didn’t think got as much development as he might have was Caspian himself. He did have moments where he learned important things, and you could see that he had become comfortable with being the leader of his people. But at the end, when he promises Aslan to try to be “a better king,” it’s hard to see quite how he wasn’t being as good a king as he should have been.

Meanwhile, Reepicheep’s yearning for Aslan’s country was first mentioned late enough that it almost seemed like an afterthought, and not that important. So that when he finally has the chance to paddle his coracle into Aslan’s country, it’s not quite the deeply moving moment that it was in the book.

I’ve seen comments from disgruntled evangelical Christians who don’t think the “Christian message” is as clear in this movie as in the book. But for those looking for a “message,” what is there is uplifting and encouraging for a wider audience. On the whole, the movie is a lot of fun and well worth seeing.